Send this page to a Friend

Safari Overview
Your wildlife-viewing will be ever fascinating, and the experience unbeatable when you Game Drive through the 2000 foot deep, 102 square mile, Ngorongoro Crater. The largest unbroken caldera in the world offers you outstanding opportunities to see diverse game animals including the rare Black Rhinos. While on this day trip Safari, you’ll find yourself snapping a plethora of National Geographic photos.
Book or
customize this
Safari
Day
Trip
Itinerary
Day Trip Safari at Ngorongoro Crater and Maasai Village
Start
Depart from Accommodation
At 6.00AM, depart Kibo Palace Hotel in Arusha (or similar), and drive straight to Ngorongoro Crater (driving time is only 3.5 hours).
About Kibo Palace Hotel 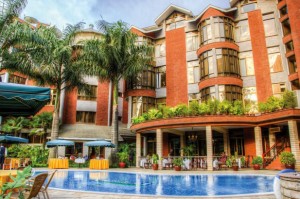 Kibo Palace Hotel - Arusha
Named after the highest peak of Africa’s highest mountain – Mt Kilimanjaro, Kibo Palace Hotel is one of Arusha’s most exciting and innovative luxury hotels; contemporary, conductive and unconventional, a luxury hotel with a new attitude. Located in the heart of Arusha, gateway to the world’s most renowned game parks, it is a 45-minute drive from Kilimanjaro International Airport (JRO) and a 15-minute walk from Arusha city center and the Arusha International Conference Center. [learn more]
About Ngorongoro Crater
Ngorongoro Crater
This caldera is an extinct volcano and the largest unbroken caldera in the world. The cone is believed to have collapsed nearly two million years ago; and while the cone was standing, it could have been as tall, if not taller, than Mount Kilimanjaro.

The Crater which is 2000 feet deep and 102 square miles, is a microcosm of African scenery with abundant wildlife including more than 25,000 larger animals. The interaction of these fauna and flora are amazing. The rest of your day will be spent here taking National Geographic photos.

The Crater will offer you outstanding opportunities to see different game animals including the rare Black rhinos, as they are protected 24-hours a day. Lake Makat on the crater floor will reward you with colourful flamingos and a variety of other birds. Patience may also reward you with glimpses of cheetah, lions, hyena, jackal, elephant, warthog, buffalo, impala, hartebeest, eland and many other antelopes. Your wildlife-viewing will be fascinating, and the experience unbeatable.
Next
Game Drive in the Crater
Get ready for a fascinating full-day of Game Drive in Ngorongoro Crater, a microcosm of African scenery with abundant wildlife including more than 25,000 larger animals. That said, the rest of your day will be spent here taking National Geographic photos. At noon, enjoy your picnic Lunch overlooking a Hippo pool.
End
Maasai Village Culture
After your picnic, you’ll visit a Maasai Village, learning about their Culture and Tradition. Following this stop you will return back to your Arusha accommodation.
About Maasai Village
Maasai Village 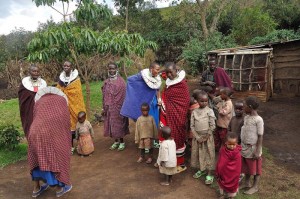 The traditional Maasai Village is called a Manyata. This is where different Maasai families live with their livestock. The Livestock live in the middle of thick Acacia thorny fences that protect them from any possible predator attacks. The visit to these villages give guests an opportunity to learn the lifestyle of Maasai people including their culture and tradition. [learn more]

Yes, I'm interested!
Have questions? Ready to book? Drop us a line and we'll get right back with you!

Use this form to book this Safari at Ngorongoro Crater (Day Trip).
You may customize a Signature Safari Itinerary to your liking, or simply design an itinerary from scratch!